Following on from my last blog regarding the principle Squash and Stretch, the next principle I'm going to cover is

Anticipation is used a lot to convey the correct body mechanics in a character, it’s also one of the key element that prepares an audience to what is about to happen.

Anticipation is used by our bodies all the time. Evolution has meant that our bodies have become very good at using minimum energy to move. We use our body mass a lot to generate the motion we need to get going.

For example, if you were standing up and wanted to take a side step to the left it would be very hard to just lift your left leg and move it to the side.
We have to first shift our weight onto our right leg allowing us to lift our left leg off the ground. Because our body has now shifted to the right side it gives us the momentum to move to the left, so we can place our foot back down. 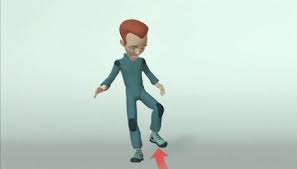 This is a very subtle use of anticipation.

A more obvious one would be a golfer. He can’t just whack the golf ball from a neutral position. He first has to turn his body, his arms and then the club. He has to turn them all the way back in the opposite direction to where he’s going to hit the ball, to give himself enough energy to send the ball flying.

This again is anticipation.

General rule of thumb is, the more energy you need, the more you’ll have to move your body in the opposite direction to build up that energy.
The great thing about anticipation is that it also prepares the audience to what is about to happen.
This has a great use, especially for things like suspense and comedy.

For example a character has a big mallet. He draws it back to whack it over another characters head. By drawing out the length of time it takes him to pull the hammer back, it not only gives the audience time to read the scene and predict what’s going to happen but it also allows the animator to set up a gag. Maybe the hammer comes flying forward but stops just above the other characters head and gently taps him. Or maybe the character draws the hammer all the way back only to then slowly fall backwards.

Slightly off subject but by creating an outcome that is completely different to what the audience was expecting is a great way of creating comedy.

Incidentally, anticipation isn’t just relevant in animation, it’s also great in musical scores as well. For example a crescendo in a horror film, just before the victim opens a creepy basement door.

If you would like to find out more about animation or are interested in having animation in your business please get in touch.